– beads (I have a few old cupcake liner containers that are the perfect size for crafts. I use them for glue or to hold small pieces like beads.)

– tag or small piece of paper to write animal’s name

I also like to use a breakfast tray to contain any beads that might spill over, they can’t roll very far.

Have your kiddo string on the beads. One at a time…

Both boys LOVED this, they had a lot of fun picking out names and deciding how many “stars” each dino had earned (I used a mixture of clear beads and star beads):

Wrap the ends tight and put on the dino. Ty named this one “Thundercrack Super Hero Squad”…

And for fun, a shoe box = bed for the baby dinosaurs: 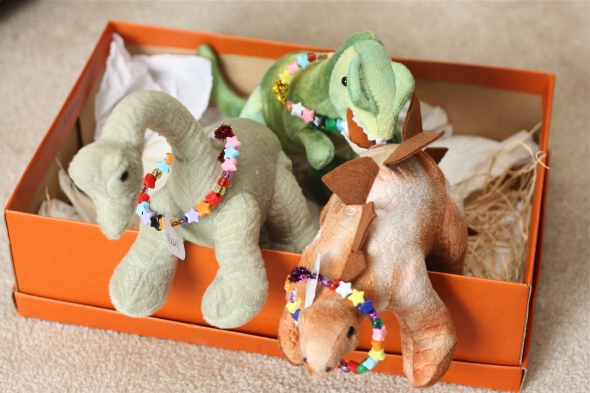 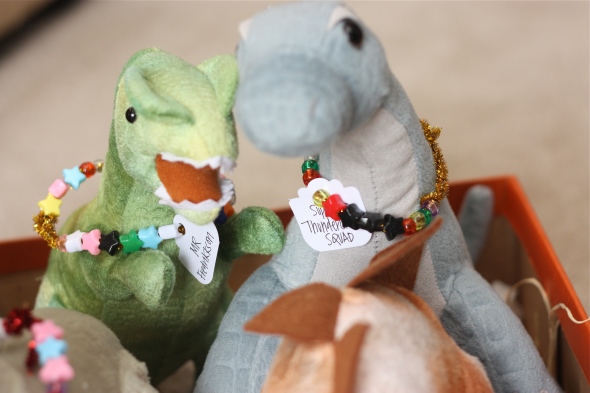 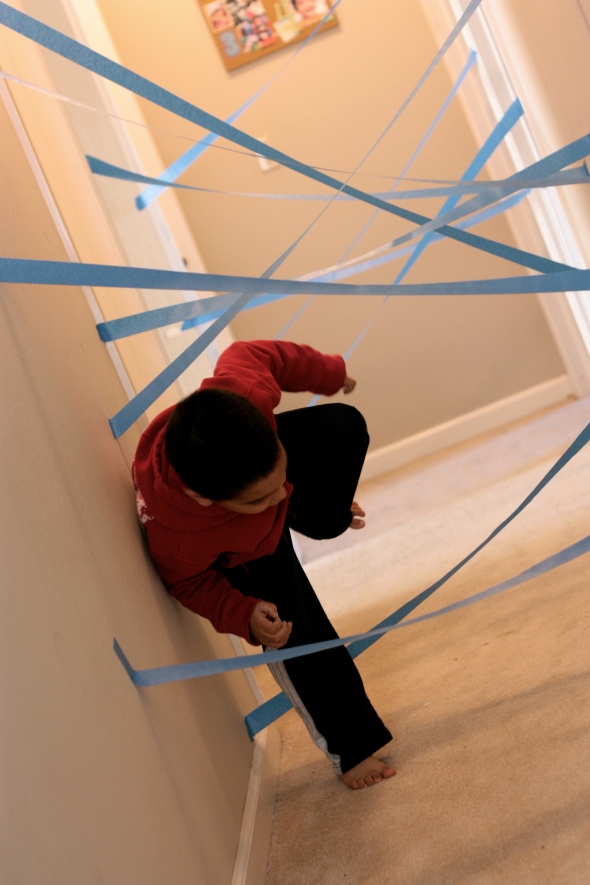 Super easy. Literally, took about ten minutes. Wash and dry an old glass jar (or use any see through container). Collect various small trinkets and treasures:

Make a simple list of all the goods going in the jar to make up your “I Spy” finding list:

Put all the goods into the jar. Even better if you have an eager helper to do this for you: 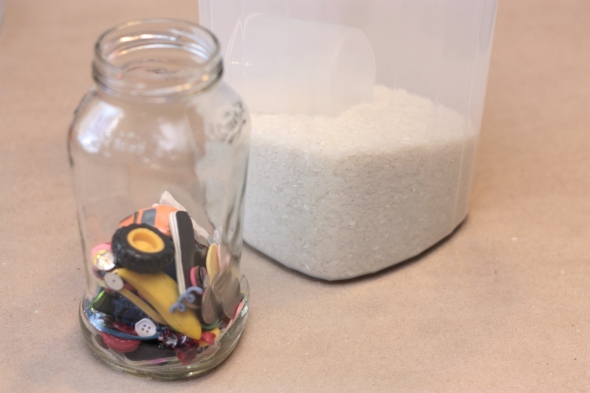 To make sure my boys didn’t use their super stealth figure-out-how-to-open-and-dump anything skills, I secured the top with hot glue and added fabric tape around the top. All ready to go. Can you find…: 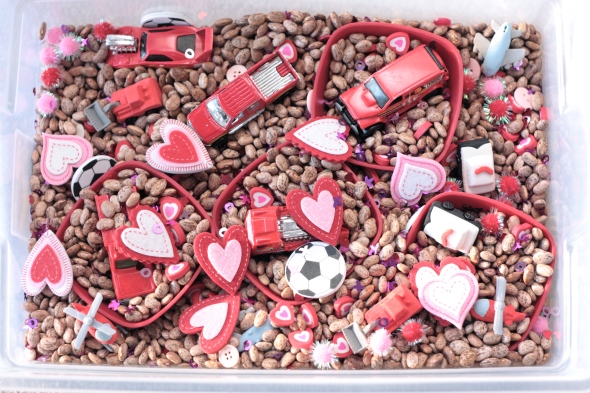 Posted: November 23, 2011 | Author: momruncraft | Filed under: Fun Activity | 1 Comment
$1 piece of scrap peg board from Home Depot, cut into thirds + big box of nuts and bolts = hours of fun. Super easy. Had Ty place the bolts every other hole. Then had him screw on each hex nut one at a time. It took forever. As planned. He stuck with it.﻿﻿

﻿﻿Poke through one bolt, screw on the hex nut, repeat. Over and over and over… 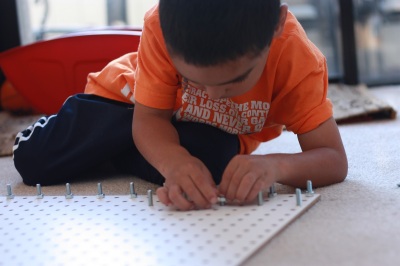 I then handed him a rubber band ball, which he thought was one of the most amazing human inventions of all time. Once the novelty wore off, we began constructing a road maze:

﻿After making a clear path through the pegs, we filled in the holes with rubber bands. The boys would later make them into parking spaces:

Enjoying their new car maze/geo board:﻿ 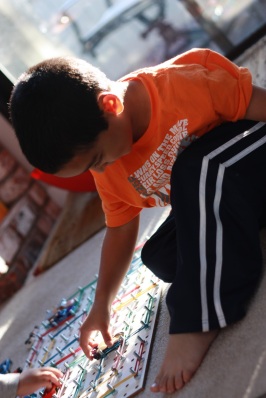 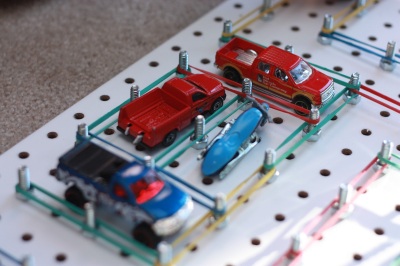 Posted: August 1, 2011 | Author: momruncraft | Filed under: Arts and Crafts, Fun Activity | Leave a comment
The boys love the idea of playing in the mud, but not so much the reality of it sticking to their hands. And clothes. And shoes. I found a recipe for mud dough and whipped it up for the boys. Super easy. They LOVED it: 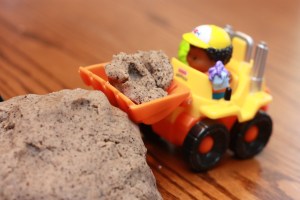 Tyson immediately ran and grabbed a few of his construction trucks:

Posted: March 25, 2011 | Author: momruncraft | Filed under: Arts and Crafts, Fun Activity | Leave a comment
We’ve had about TEN days of rain IN A ROW. TORTURE for this outdoor-loving Mama. Everyday this week, we’ve had down pouring-can’t-play-outside rain and poor Jake goes to the sliding doors…”Outside Mama? Bubbles? Swing?”

Today, out of sheer desperation, I broke out our hidden art supplies. Many of which the boys haven’t seen before:

I decided to try something they both loved at school. We would paint with Matchbox cars, animals, and rubber balls. Dip item in paint…roll around in box. I had each of them find two or three cars and taped the paper down:

We tried big stamp pads first. Ty had fun but the cars didn’t really pick up enough ink to make the prints stand out: 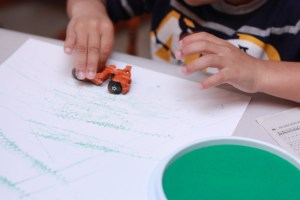 So, we moved onto paint. And got the desired effect:

I also had some black canvas pieces for the boys to paint and decorate:

Jake also liked to dip and roll with the cars. It was a super easy, fun way to get them to paint. Usually neither boy is interested in finger painting (or getting their hands dirty): 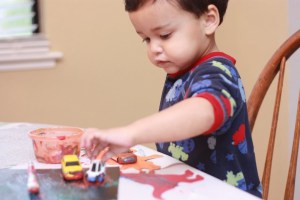 I found some BIG letters and let them each paint one. First with blue and green. And then with glitter glue. The boys apparently love the bling. Biggest hit of the day:

So glad I spent twenty minutes covering every inch of our kitchen table. Thought this would make a fun scrapbook picture: 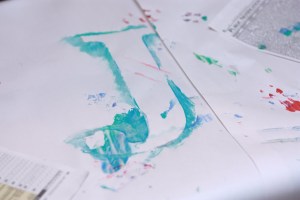 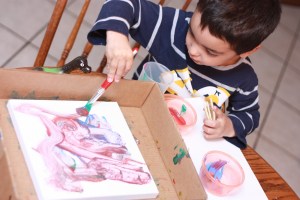 I don’t think we’ll ever paint without the box again. Kept everything contained, dry, and clean:

After a few hours, many snack breaks, many dance breaks….our final products:

Which then turned into some much needed hallway art for the house. Ty’s box:

LOVE the boys’ art. It makes me smile. And love that they were so excited to see their shadow boxes and art hanging up: 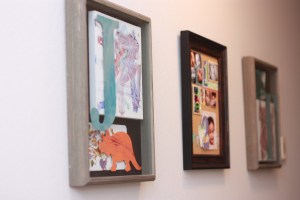 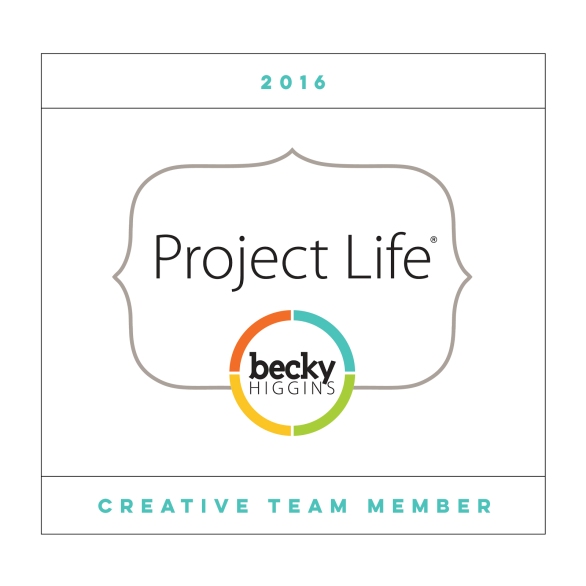