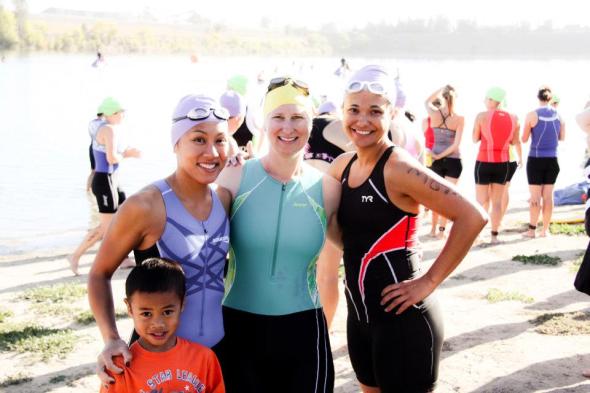 I don’t know why this post has been so hard for me to write. I have sat down many times…and nothing.

This “race” was different for me.

In the past, I have gone into races feeling prepared. Not always completely prepared, but I knew I would finish. At some point. I have been lucky in that running has come pretty easy. I have been able to set goals and meet them. This tri…

I set goals. I had a plan. And then, life got in the way. I went back to work. I lost my primetime training time. My bike broke. With all the challenges, I lost my confidence. I went into this race day, scared, nervous, and completely unsure. I had no idea what to expect. I feared the water. We received an e-mail the night before letting us know the swim portion may be cancelled all together due to questionable water test results. I later feared death as I inadvertently swallowed some of the lake water.

A bundle of nerves, I arrived much earlier than anticipated. I couldn’t sleep so I figured I would head on over. Luckily, I ended up parking right next to one of my partners in tri crime. We ventured over to the transition area. We had no idea what we were doing and followed the lead of others who looked to know what they were doing. We laid out our gear, hung up our bikes, and chatted.

As time passed, we prepared for the swim. Only to hear that the start would be delayed ten minutes. Okay. Time to use the restroom. And then another twenty-minute delay. And then another. And then another. ONE HOUR later, the first wave was finally preparing to hit the swim. Road work forced the race staff to re-route the bike route which caused an overall hour delay in the entire race.

As we finally set foot in the water, I was confronted with seaweed. It’s a texture thing. It’s slimy. And gross. And I just don’t like it. At all. I realize it won’t eat me. Or kill me. But it will touch me. And it did.

I wasn’t prepared for the swim. For the mass start. For the head kicks and body shoves. For the massive amounts of water I would swallow just trying to find a space to fully stroke forward. I simply did all I could to finish. It wasn’t pretty. It wasn’t fast.

But I finished. And learned that you should swim as far in as possible. I stood up too soon. And quickly realized just how hard it is to run in water. I was physically exhausted. And we had just started…I am so not a swimmer.

Off to the transition area. Running in tri swim gear: not so fun. Humbling. Jiggly.

And off I biked. Despite the plethora of women that passed me, I was working HARD. I cursed the fancy road bikes passing me. And pedaled away. Finding a groove. Hoping I could recover some time on the run…I am so not a biker.

Finally back in the transition area, I hung up the bike. Grabbed my hat, threw on a skirt to cover the caboose, and ran off. In my head, this was all done gracefully and quickly. In reality, not so much. My legs were utter and complete jelly. I willed myself to run faster but it didn’t happen. I just tried to keep moving…and managed to do so. It took nearly two miles for my legs to find a groove. It was a three-mile run.

I have never been so happy to see a finish line.

All in all, I am excited to have finished. I can say that I have completed a triathlon.

I can also say that I have absolutely no desire to do another.

This tri showed me just how little you truly need to run and gave me a whole new appreciation for running. I wanted something new, and got it. It wasn’t what I thought it would be, but I am grateful for the lessons learned:

* I literally worried for days afterward that the kick to the head that forced me to swallow water might cost me a limb, or stomach virus. No third eye, yet.

* Tri gear is not photo friendly, the damn bike shorts cut right into your thighs for a remarkable and impressive sausage look (even more special when wet and sparkly).

* The dog paddle is remarkably effective and keeps your face far away from said nasty lake water.

* I have amazing, supportive friends who take time out of their busy weekend…

* I have driven, remarkable, athletic women in my life who also completed this race with me.

I completed the swim. I finished the bike portion. I survived the run.

Looking back through these photos and I can see why I have been so drained: physically, emotionally, creatively...I was sick the first couple weeks of March, I picked Ty up from his seventh grade trip only to discover he had fractured his arm there (wholeeeee ‘nother story), we had to deal with the school trip situation, Tyson was devestated to be missing baseball, alllll the while, Mark is out of town...then things slowly got postponed, then cancelled. Now, here we are. I was not intending to document the current situation but just started to journal in the monthly pages. I am hoping one day we can look back at these pages and smile having survived the cancellations, quarantine, and weeks of uncertainty. Grateful to have found a happy crafty mojo. #memoryplanner #plannerprintables #plannerinserts #storytelling #scrapbooking