Six months ago, I would have never dreamed I would be HERE: no start line, no race bib, no running shoes. Just me and nearly 400 other “rookies” attempting to battle it out at a local CrossFit Rookie Rumble. Many of us hoping to just place “winner” in our own personal categories of goals.

My journey in CrossFit started out of pure curiosity. In search of something new, I took the dive with a good friend. We entered our local cave for our first on ramp class and were nervous, intimidated by the Google images shone across our computer screens the night before. As we worked our way through the on ramp classes, the puzzles pieces began to fall into place. For the first time in our fitness careers, we were learning proper form, being pushed to our limits, and loving it. Each day brought a new workout, a new challenge, a new success.

I worked my way from two WODs a week to three, eventually working to four or five. Sore became the new normal, bruises proud battle scars, and the numbers on the clock my new ideal v those on a scale. There is nothing more bonding than sharing the mutual suffering of an extraordinary workout. Welcoming smiles, a friendly handshake- the people were becoming just as important as the workouts. Which is how, on a seemingly normal Friday afternoon, I was talked into entering a local Rookie Rumble. The thrill of signing up lasted a few days until the REALITY of the comp started to set in. The truth was, I had never even been to a competition. I had no idea what I had got myself into: my big scary goal of 2013 was set in stone. I was comforted by the fact that there would be no seaweed. Or bike shorts (see last year’s big scary goal).

So, as I walked in to register last weekend on competition morning, I was rendered scared and nervous by the sights and sounds of something completely, utterly DIFFERENT. Used to the comfort of a starting line, race bib, and running shoes, I was surrounded by barbells, kettle bells, and chalk. Unlike running a race, there was nowhere to hide, no pack of runners to fall into if you’re having a bad day.

Only seconds into the first WOD, all the faces quickly disappeared. 21-15-9: squat cleans, kettle bell swings, and lateral jumps stood between me and the end of WOD 1. My only real goal: finish. The funny thing, I wasn’t surrounded by competitors, I was surrounded by a massive mob of support: screaming coming from every angle. The judges coaching me, pushing me, encouraging me… 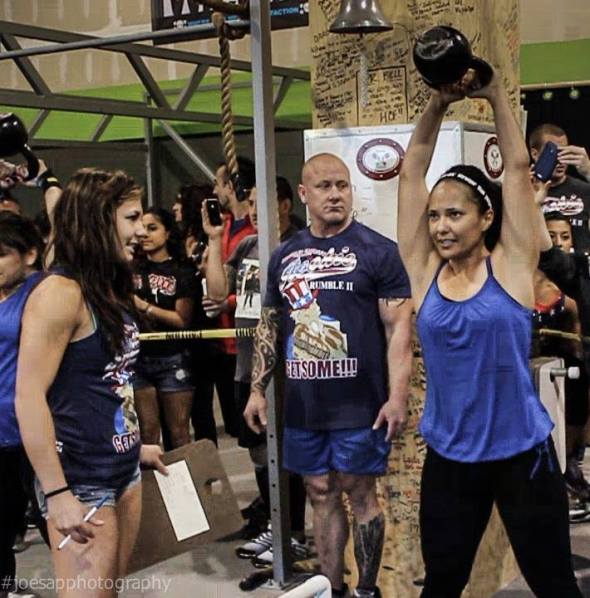 The nerves never went away. I will likely kick myself for a long time over my misinterpretation of a movement in WOD 3. However, overall, I am in awe of the awesomeness and inspiration I witnessed. So many different life stories, ages, sizes, yet we were all THERE doing the SAME thing. The last finisher receiving a bigger applause than the first, the entire audience willing the individual to finish.

I have never been anywhere with so much love, support and camaraderie. No egos, attitude, or negativity to be found. I am grateful I had four fellow cavers to compete with, to help ease my nerves, and to train with. I am also grateful to all those who came out to support, many of whom woke up early on their Sunday morning to drive out to the competition and many of whom completed the comp WODs with us to help us prepare.

When I toe up to a start line of a race, I am often overwhelmed with a sense of accomplishment. The months of training are the hardest part for me. Race day is the prize. I know I’ll finish. I may not get the time I want, but I know I’ll finish. This competition was an entirely different beast. There was no one start, instead, there were three. Each being very different from the one before. The rise and fall of nerves, excitement, and anticipation made for a long day. I have learned a great deal about myself since starting CrossFit. I am stronger than I ever imagined possible, yet have a long way to go. Like running, it will get easier but never easy and there will always be challenging new goals.

For months, I felt like the fish out of water. However, I have never been surrounded by such supportive comrades and friends. Just as I was a reluctant runner, and felt uneasy calling myself one. I feel as though I can reluctantly say, I am a CrossFitter. It has taken me a long time to learn that winning isn’t always about crossing the finish line first. It’s about having heart, determination, and the courage to step out of your comfort zone. THESE are lessons I hope my boys see, live, and learn.